What is Diabetic Foot Ulcer?

Diabetic foot ulcer is a main complication of people suffering from diabetes type 1 or type 2. The onset of diabetic foot ulcer puts a diabetic patient at greater risk for limb loss or amputation. The risk for amputation is increased eight fold that health professionals play a vital role in managing and preventing lower extremity ulcer among their patients.Diabetes is a group of metabolic diseases characterized by high levels of sugar in the blood resulting in a deficiency in the function and secretion of the insulin. The incidence of diabetes overtime can lead to various problems in health such as kidney failure, blindness and nerve damage. Millions of people all over the world are being affected with diabetes and it is regarded as the 7th leading cause of death. Diabetic foot ulcer is among the problems or complications that can arise from chronic disease which makes an affected individual at high risk of losing a limb. See : What are the Long term Complications of Diabetes ?Diabetic foot ulcer can either be from neuropathic or vascular complication of the disease. A foot ulcer is characteristically a sore that develops on the surface of the skin but can also be deeper in the skin. People with diabetic foot ulcer are prone to suffer from infection due to an open wound while the ulcer generally takes longer time to heal or may not heal at all. When an infection occurs, a pocket of pus and cellulitis may develop including bone infection. Gangrene may later occur which can lead to poor circulation subsequently amputation or a loss of a limb.

A foot ulcer usually develops on the surface of the skin or may also develop in the deeper layer of the skin. It resembles a reddish crater that is usually located at the side or at the bottom of the foot or may be on the top or at the toe tip. The border of the crater is enveloped by the thick and callused skin. Severe ulcers on the other hand are rather deeper and may reveal a tendon or a bone. The ulcer is often painful if the nerves of the involved foot are still functioning. In the case of nerve that is not functioning, the pain is not felt and the presence of the foot ulcer may not be noticed.Diabetic foot ulcer generally exists in two types which are classified according to their origin while each type has their own symptoms.Neuropathic ulcer involves the neuropathic foot. The foot is generally warm and with a well palpable pulse. Sweating is often reduced while the skin is dry and potential for development of fissures.Neuroischemic ulcer is neuropathy associated with ischemia. The foot unlike in neuropathic ulcer is often cool to touch and the skin is thin and shiny. There is also no presence of a pulse and pain while intermittent claudication and atrophy of the subcutaneous tissue can be observed.Pain is often absent for most of its cases and the severity is generally rated from 0 to 3 with 0 being the mildest while 3 being the most severe in extent. No ulceration observed at the risk foot is rated as 0 while superficial ulceration with no noted infection is rated as 1. The presence of deep ulceration with an exposure of tendons or bones is rated at 2 while deep ulceration or with the presence of abscesses is rated as 3.The tissues surrounding the ulcer are black in color as a result of insufficient blood flow to the affected foot. Partial or complete gangrene may be present in severe case of diabetic foot ulcer. Wound infection and cellulitis may also be present and usually as a secondary infection.The presence of intermittent claudication is manifested by fatigue or cramping of the major group of muscles in either one or both extremities. Ambulation only aggravates the symptom until the patient can no longer walk a distance. Other symptoms of diabetic foot ulcer include ischemic pain at rest, development of non-healing ulcer or sore on the foot. Gangrene may also occur and is often due to an infection.

The onset of diabetic foot ulcer is being linked to the complications of the disease in the nerve and in the blood vessels.Peripheral neuropathy is described as damage to the nerves of the feet or the lower leg. This condition is commonly caused by diabetes. Peripheral neuropathy will make the patient feel nothing or feel no pain and discomfort. People with peripheral neuropathy is unable to perceive pain when they stepped on something sharp or when their feet is in discomfort or when the feet is already injured or wounded unless given a closer look.Vascular disease impairs the circulation to the feet which can later cause the ulceration. The foot is made vulnerable when it is deprived of cell oxygen due to insufficient supply of oxygenated blood. The ability to heal is also diminished as a result of poor circulation.

The primary aim of treatment of diabetic foot ulcer is to prevent it from occurring. In case diabetic foot ulcer already occurred, the goal of treatment is to prevent infection and to prevent further complications including possible amputation of the affected foot.The treatment of diabetic foot ulcer requires bandaging or wound dressing of the affected foot. It also requires antibiotic treatment, debridement including platelet-rich fibrin therapy and arterial revascularization.Wound dressing has various methods of treating diabetic foot ulcers. The dressing can be in the form of hydrogel dressing, hydrocolloids and absorptive fillers. Platelet-rich fibrin therapy enhances wound healing.It is also necessary to determine if the ulcer that developed is neuropathic or vascular or a combination of both in nature. Identifying the nature of the ulcer will help in determining the method of treatment appropriate to the patient.Neuropathic ulcer requires protection from further injury while the wound is in the process of healing. Several methods of protecting and treating the wound should be strictly followed to enhance healing while frequent skin assessment is also necessary to monitor the improvement or the progression of the foot ulcer.Vascular ulcer generally requires a careful examination and evaluation from the surgeon to identify the extent of the damage whether partial or complete amputation is necessary or if amputation is necessary at all. 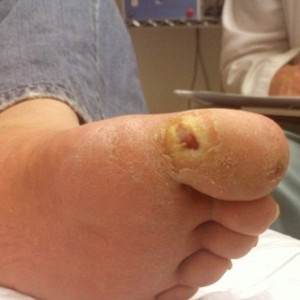 Thank you! Your submission has been received!
Oops! Something went wrong while submitting the form.
Posted
Jun 29, 2014
in
Diseases and Conditions
category
View Posts

Thank you! Your submission has been received!
Oops! Something went wrong while submitting the form.
END_OF_DOCUMENT_TOKEN_TO_BE_REPLACED
Fitness and Diet