What is Erythema Nodosum?

This medical condition is a very uncommon skin condition that can be a painful inflammation of the fat that is below the surface of your skin. It is considered an “acute” skin condition which means that it will come on quickly and will usually disappear within two months.Although most of the cases of erythema nodosum do not lead to any serious health complications it is important that you see your physician or dermatologist so that they can identify and then treat the underlying cause of this skin condition. Although it can affect anyone of any age, gender, or race erythema nodosum usually will affect people between the ages of eighteen and forty and appears to be more prevalent in women.

The nodules or lumps that appear under your skin will usually appear just under your knees or your shins but they can also appear on other areas of your body like your buttocks, arms, and legs.When a person has erythema nodosum they may or may not have symptoms that can warn them of the onset of this skin condition. If there are early warning symptoms they will usually start to experience them seven to twenty-one days before the lumps or nodules appear and can include:

Other symptoms of erythema nodosum can include:

In over fifty percent of the cases of erythema nodosum the exact cause is not known although the cause has been linked to a variety of infections. It can occur in association with other conditions or as isolated condition. The most common infection that it has been linked to is strep throat. The least common cause is that having erythema nodosum is the first sign of a systemic disease. Some of these systemic diseases can include inflammatory bowel disease, deep fungal or bacterial infections, or tuberculosis. It is rarely linked with cancer. Having erythema nodosum can also be a reaction to medications like oral contraceptives or antibiotics. Many physicians and dermatologists feel that erythema nodosum is the result of your immune system’s inflammatory response to fungi, certain medications, or bacteria.Although these are not exactly causes but are risk factors that put people at risk for developing erythema nodosum which can include:

The physician can usually make a diagnosis of erythema nodosum based on the physical appearance and where the lumps or nodules are located. The physician may also do other diagnostic tests to find out what the underlying cause is. Doing a skin biopsy or having blood tests can reveal if there are any particular fungus, toxin, or bacterium is the cause of their case of erythema nodosum. The physician may also have a chest x-ray taken to see if there are signs of a more serious inflammatory disorders.

As it will usually clear up on its own within a couple of a months there is no real treatment that is needed. It can be uncomfortable and sometimes it can come back. This is why many physicians and dermatologists make a treatment plan for getting rid of erythema nodosum.In addition when you follow the treatment plan for treating the existing underlying condition can help to reduce your chances of experiencing a recurrence of the skin condition. How erythema nodosum is treated depends on what is the underlying cause.You can take pain-relieving medication to help ease the symptoms of erythema nodosum. A common medication taken for the management of the pain erythema nodosum nodules or lumps can cause would be a non-steroidal anti-inflammatory drug (NSAID). It can also be treated with anti-fungal or anti-bacterial medications. Any medications taken will help with the swelling and pain that is localized.If the patient has Crohn’s disease you should avoid taking NSAIDs because this medication can make the disease worse or trigger a flare-up. Some of the NSAIDs that can be taken include:

Depending on what the primary cause of the skin condition there are also alternate NSAIDs that a person can take that can include:

In addition to taking medications to help with the pain you can also apply cold or hot compresses to the lumps or nodules. You should also avoid any activities that aggravate your pain until the symptoms have gone away. When the erythema nodosum goes away it may leave a chronic indentation in your skin where the fatty layer was injured or have a temporary bruised appearance. 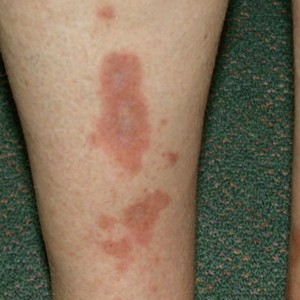 Thank you! Your submission has been received!
Oops! Something went wrong while submitting the form.
Posted
May 23, 2014
in
Diseases and Conditions
category
View Posts

Thank you! Your submission has been received!
Oops! Something went wrong while submitting the form.
END_OF_DOCUMENT_TOKEN_TO_BE_REPLACED
Fitness and Diet