What is Fissured Tongue?

Fissured tongue is a common and benign condition that affects the surface of the tongue. It is a common condition that is experienced by the general population or that has affected the general population at one point in their lives. Fissured tongue is characterized by a deep groove or furrows on the upper portion of the tongue or at the lateral part of the tongue.Fissured tongue can be seen in the general population although the prevalence is diverging in graphic location. It is a common and benign condition with seen prevalence among male gender without racial predilection. Mortality and morbidity are not associated with the tongue fissure itself as the incidence is somehow viewed as a normal part of the structure of the tongue except for those associated with some other diseases that are already in existence. Fissured tongue is generally painless except in instances where food particles and other debris get trapped in the groove or when associated with geographic tongue although there are some affected individuals who complain of burning sensation.Fissured tongue is also called by other names such as lingua plicata, plicated tongue and scrotal tongue. It is a condition that greatly involves the tongue although in a way, it is not discomforting yet this condition is often associated with bad breath.The tongue is composed of a group of muscles and is covered by a pinkish lingual membrane with tiny projections known as the papillae. The tongue is a versatile and important organ of the body responsible for tasting and is also an important part of speech and articulation. Different diseases and disorders can occur in the tongue which can be discomforting. Fissured tongue on the other hand is not a disease itself but is believed to be part of the normal structure of the tongue which does not cause discomfort. It is a benign condition millions of people get to experience. 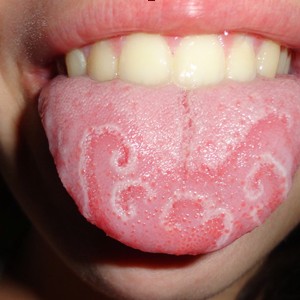 Thank you! Your submission has been received!
Oops! Something went wrong while submitting the form.
END_OF_DOCUMENT_TOKEN_TO_BE_REPLACED
Fitness and Diet