What is Keratosis Pilaris?

Keratosis pilaris is a condition that occurs during childhood and adolescence stage. It is a skin condition characterized by the growth of acne-like bumps or similar to a chicken skin that often develops in the outer side or back of the arms, thighs, cheeks and the buttocks. The chicken skin like bumps may also occur in any other part of the body except in the glabrous skin such as the palm of the hands or sole of the feet.Keratosis pilaris is a common and harmless skin condition that can affect the general population regardless of age and gender. This skin condition does not have a long term effect on the overall health nor does it have mortality or morbidity association except that Keratosis pilaris can be unappealing in terms of the cosmetic aspect. The incidence is prevalent among young children and is more common in female than male gender. The symptoms of the disease on the other hand, intensify as the child reaches prepuberty stage. It is believed that Keratosis pilaris usually resolved by the time the child reaches adulthood although this is not always the case. Keratosis pilaris is a non-contagious condition and even healthy individuals can get affected.Keratosis pilaris is an autosomal dominant condition of the genetic follicular which can exist in babies and becomes more apparent by the time the child reaches the teenage years. The incidence is not common among elderly people while it is prevalent among overweight individuals and those suffering from ichthyosis or atopic dermatitis.

Keratosis pilaris has various types which are classified according to the characteristic of the skin patches that developed. Although with several types, Keratosis pilaris in general occur as recognizable skin bumps that are rather rough and dry. The skin patches are similar to goose bumps that stayed on permanently or are similar to a chicken skin. It is generally unattractive or unappealing and may cause discomfort to the patient. It is however, a harmless condition yet can affect the quality of life.The affected skin in Keratosis pilaris will have the skin covered in tiny bumps similar to the appearance of goose bumps which can have a reddish, whitish or skin-tone color. The skin will feel rough and dry and itchiness may also occur. The size of the keratotic papules is about the size of a sand grain or is about 1 mm to 2mm in diameter and develops with about 10 to 100 tiny bumps scattered on the skin of the affected area and which makes the skin feel like sandpaper.The different variants of Keratosis pilaris include the following:

Keratosis pilaris is the result of excessive production of protein in the body known as keratin. Keratin is a substance responsible for protecting the body against harmful substances and infection. An overproduction of keratin results to its buildup thereby obstructing the portal of the hair follicle. The buildup of the excess keratin causes the rough patches and skin bumps similar to the appearance of a goose bump or chicken skin.The cause of keratin buildup remains unclear but Keratosis pilaris is being associated with a genetic disease and other skin disorders. The development of the tiny bumps is the consequence of an ingrown hair that is prevented from going out of the pores and which leave them encapsulated thus the formation of hard plugs.Keratosis pilaris is a condition that occurs in an autosomal dominant pattern and which is believed to run strongly in the family. A child with a parent affected with Keratosis pilaris has a chance of inheriting the disease. The disease on the other hand can occur sporadically as in the case of healthy individuals without the family history of Keratosis pilaris.Keratosis pilaris is not a contagious skin condition which can be transmitted from one person to another. It is rather a harmless condition that is mostly aggravated or intensifies during the dry winter season. It is a common skin condition that mainly affects young children and those in the adolescence stage. The disease is believed to improve as the child advances in age or by the time the child reaches adulthood although this is not always the case.

Home remedies and other self-care measures can help in improving the appearance of the rash aside from softening the skin with keratin buildup.Home remedies for Keratosis pilaris may include the following: 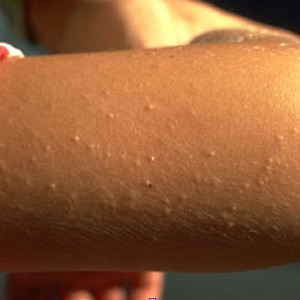 Thank you! Your submission has been received!
Oops! Something went wrong while submitting the form.
Posted
May 10, 2014
in
Diseases and Conditions
category

Thank you! Your submission has been received!
Oops! Something went wrong while submitting the form.
END_OF_DOCUMENT_TOKEN_TO_BE_REPLACED
Fitness and Diet