Lipoma is the most common benign tumor that is composed mostly of adipose tissues and develops in the subcutaneous tissues. It is a slow growing tumor that sometimes appears in solitary or may occur in a multitude.Lipoma is can affect both men and women of adult age but is mostly evident in middle aged individuals. Lipoma in solitary is common in women while in men, it is often in multitude. It can affect people from all age levels but very seldom affects children yet it can occur as part of an inherited disease.Lipoma is typically small in size and is mostly found in the areas of the shoulders, arms, upper back, upper thighs and buttocks and is rarely found in the deeper tissues of the shoulders, thighs and calf. It is generally a harmless condition and is non-life threatening although the growth of the tumor can be bothersome. Lipoma is usually not painful and if it does become painful, the lump can be removed surgically. It is a benign tumor that has no potential of becoming malignant and no capability of spreading to another or nearby tissue and cannot extend to other parts of the body distant from the original lump.

Lipoma is basically asymptomatic that it sometimes remains unnoticed until it grows into a size that is large enough and palpable enough. Lipoma is distinct from many other types of lipoma and should not cause for alarm.The characteristics of the lump in Lipoma which makes it different from any other type of skin tumors are:

On the other hand, the symptoms of lipoma will also depend on the location where it developed. The signs and symptoms according to the location of tumor growth may include the following:

Lipoma is composed of sub-types which are classified according to the presentation of the tumor that has developed and as seen under the microscope.

The exact cause of Lipoma remains unclear. Genetic involvement is speculated to trigger the onset of Lipoma although this remains to be studied. It is however, considered to increase the chances of developing Lipoma among predisposed individuals.Lipoma is also being linked with post trauma or so called post-trauma lipoma. Minor injuries are believed to contribute to the development of lipoma but this claim remains controversial and needs to be studied further. A blunt blow in the body or in any body part is also considered to cause the incidence of Lipoma but this too remains controversial.Correlation of Lipoma in certain occupation or in particular exposure to chemicals and radiation including other harmful environmental factors are also speculated in the onset. These however, remain to be studied and there is still no clear proof to this claim.Risk factors are considered to increase the chances of developing Lipoma and such include the following:

Lipoma is generally a harmless and non-life threatening condition that treatment is often not necessary unless the growth causes significant pain and for cosmetic purposes as well. Numerous factors should be considered prior to recommendation of treatment.The factors considered prior to treatment of Lipoma will include the following:

Steroid treatment through injection may help in Lipoma. It is beneficial in reducing the size of the tumor although steroid injection does not necessarily resolve Lipoma completely.

Lipoma is generally removed if it causes significant pain and has grown large enough to interfere with the bodily function. Lipoma can be removed in accordance with the preference of the patient mostly for cosmetic concern.Simple excision or removal of the lipoma can be done to completely remove the tumor. The procedure requires a local anesthesia and will allow the patient only an out-patient basis. Recovery will depend on the size and location of the tumor.Liposuction is another method of removing a lipoma. This procedure works well in diminishing the size of the tumor with the use of a needle and a large sized syringe.

Lipoma has no definite treatment except for surgical removal which does not guarantee a recurrence. The exact cause of Lipoma is still unknown that certain methods of preventing the occurrence of Lipoma remain elusive. 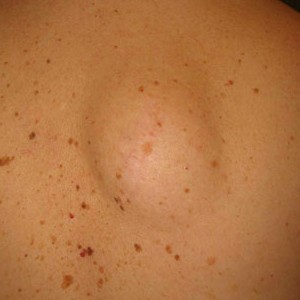 Thank you! Your submission has been received!
Oops! Something went wrong while submitting the form.
Posted
May 27, 2014
in
Diseases and Conditions
category
View Posts

Thank you! Your submission has been received!
Oops! Something went wrong while submitting the form.
END_OF_DOCUMENT_TOKEN_TO_BE_REPLACED
Fitness and Diet